I'm troubled to report that the image below is a real advert.  It is attributed to CyberFirst, a programme led by the National Cyber Security Centre to encourage young people to get into tech. It is a scheme which is backed by the UK Government.

Acclaimed choreographer Sir Matthew Bourne was among those taking to social media to criticise the campaign (singling out the example below), asking rhetorically: "This has to be a joke? Right?"

But it isn't a joke.  It has also been described as 'patronising' and some far ruder things to boot.

Under the above slogan, the campaign promotes a series of case studies to encourage people to re-train for a job in digital sectors.

The campaign doesn't appear to be deliberately provocative. Instead, it seems to have been simply tone deaf.

In the example mentioned below, which is perhaps the most jarring, the ad shows a ballet dancer called Fatima. It states: "Fatima's next job could be cyber (she just doesn't know it yet)." With a HM government logo, it includes the strapline "Rethink. Reskill. Reboot".

Now several senior politicians have spoken out against the ad, joining prominent voices from the arts and culture.

The UK Culture Secretary, Oliver Dowden said the advert did not come from his department, and tweeted: "I agree it was crass."

Mr Dowden said in a tweet: "I want to save jobs in the arts". He said the advert "was a partner campaign encouraging people from all walks of life to think about a career in cyber security". He added that £1.57bn is being invested in the industry.

Some (including many "lefty lawyers") have argued that some other senior politicians should consider following the advice in the ad: "Rethink. Reskill. Reboot".  At least I assume some people have argued that. I can't be the only person to have thought it...

"This has to be a joke? Right?" - Sir Matthew Bourne, Choreographer 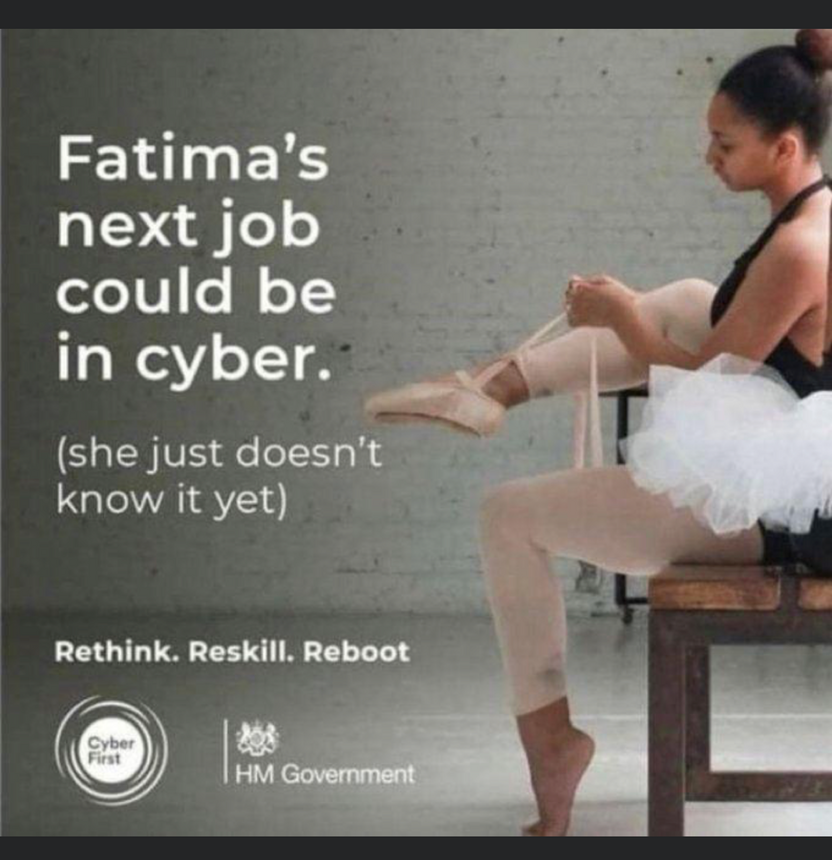